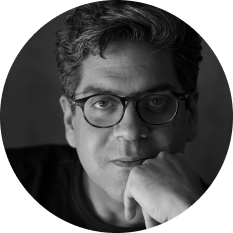 Sunhil grew up and was educated in the UK before heading to America to pursue an undergraduate degree in English Literature from Georgetown University. He moved to Mumbai in 1995 to explore a career in film and advertising. His first feature Snip! won the National Award for Best Editing in 2001 after which he went on successfully directing for brands like Asian Paints, Blue Star, Pepsi, Horlicks, and Lux among many others. His photographic work began with vigor around 2008, and his passion for the streets of Mumbai has broadly driven his vision for the past 15 years. Sunhil is committed to philanthropic photographic and film work for NGOs such as The Savitri Waney Charitable Trust, Teach For India, Akanksha, and Hamari Silai. His first book of photographs The Opium of Time was published in 2022 by Pictor.

No comments to show.